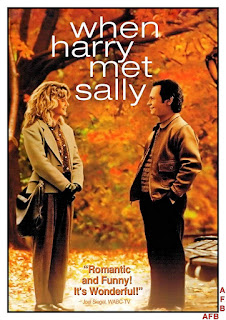 August is Romance Awareness Month, so I'll be talking about my favorite romance and rom-com movies. First up is When Harry Met Sally... (rated R), which is thirty years old this year! (Fathom Events is showing this at theatres around the US in early December for the anniversary.) I've seen When Harry Met Sally... many times--I've lost count. It features Meg Ryan, Billy Crystal, Bruno Kirby, and Carrie Fisher, with a stellar script (nominated for an Academy Award) by Nora Ephron, and is beautifully directed by Rob Reiner. Harry (Crystal) and Sally (Ryan) meet, dislike each other, meet again years later, and become friends. It's take on friendship, dating, and romance is still relevant today, and it entertains me every time I watch it. I also love the soundtrack, full of classic songs like "It Had to be You" and "Where or When," performed by a then virtually unknown Harry Connick Jr. When Harry Met Sally... is a smart, funny, touching film that is fun to watch again and again over the years.