After seeing The Bridge on the River Kwai, I really wanted to rewatch William Holden's performance in another WWII POW movie, Stalag 17. And the next day, I did. I've seen it many times now, but it's been over a year, and with each viewing, I find something new to enjoy in the film. My friend who watched with me this time had never seen it, and was struck at first by the stereotypical portrayals of the Germans in the movie. However, I think the characters are more nuanced than mere stereotypes, and enjoy the specificity of the characters, even though on the surface, they all--including the prisoners--have stereotypical elements. The film tells the story of a group of Americans in a German POW camp during World War II, with "Hoffy" (Richard Erdman) narrating the tale. It's both comedy, mystery, and a slice of life drama, directed with his usual verve by Billy Wilder (who also worked with William Holden on 1950's Sunset Blvd. and 1954's Sabrina). 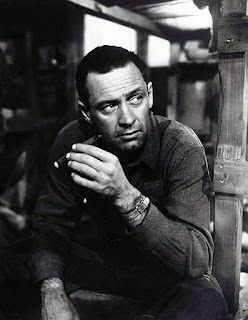 Stalag 17 is, I think, my favorite performance by William Holden (for which he won the 1954 Oscar for best actor). He's brash, contained, charming, cunning, devil-may-care, and, in his own odd way, heroic. He inhabits the part of Sgt. JJ Sefton, and it's a joy to watch, despite the subject matter. The comic relief of Animal and Shapiro never gets old for me, and every time I also appreciate more and more the ensemble cast, especially the performances of Don Taylor as Lt. Dunbar and Otto Preminger (who directed one of my favorite noir classics, Laura) as CO of the camp, von Scherbach. The pacing of the film, and the cast's timing and rapport make this a pleasure to watch again and again.