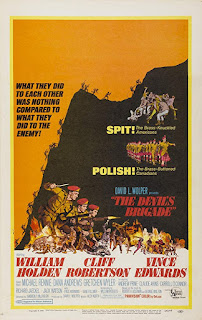 The Devil's Brigade (link to IMDb/photos via IMDb)

An American colonel who has never been in combat is assigned to create a special forces unit from Canadian Army troops and a ragtag group of U.S. Army misfits.
1968/130 minutes/color

Once again, I found myself at my sister's to watch a William Holden movie. Since we're trying to watch some of his movies we haven't seen before (unlike favorites like Stalag 17 and Picnic), we decided on The Devil's Brigade (which is free on Amazon Prime). We knew going in it might not be very good, and we were right. However, if you like war movies and aren't too choosy about things like the quality of dialogue or the actor's accents, The Devil's Brigade may be worth a watch. There's also a good amount of Holden (in the starring role as Lt. Col. Fredrick), as well as appearances by Cliff Robertson (whose accent is all over the place!), and a young Richard Dawson (the original host of Family Feud) chewing up the scene--and other TV greats like Carroll O'Connor and Claude Akins. Really, it's Richard Jaeckel whose performance shines as acrobatic Pvt. Omar Greco (he's in blue in the picture below).

The film jumps from a scene in England (with a nice cameo by Patric Knowles--Will Scarlet in 1939's The Adventures of Robin Hood--playing Lord Mountbatten, aka Prince Philip's uncle) to the training facility where a bunch of Army rejects and misfits gather, soon joined by a Canadian troop. From here, the film follows the usual army unit-against the odds formula, with some fun moments.

Holden shows his hard living here (he was an alcoholic, by all accounts) but his performance is still solid, and my sister and I always enjoy watching him. I found a good review of the movie that I pretty much agree with--it's an uneven film that is ultimately somewhat entertaining and could spur you to learn more about the history behind this heroic brigade, but it's not a stellar example of the genre, or Holden's talents. I'll be back next week with a movie starring another one of my favorite male stars of the era--Cary Grant. Until then, happy summer (if you're in the same hemisphere as I am)!
Posted by Reina M. Williams