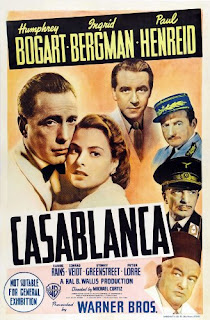 Casablanca
"A cynical American expatriate struggles to decide whether or not he should help his former lover and her fugitive husband escape French Morocco."

Casablanca is a wartime picture that is so much more: drama, comedy, suspense, romance, bromance... :) It has become so much a part of Americana that it is cliche. "Here's looking at you, kid," and "Play it again, Sam," and other quotes and misquotes are used and misused, spoofed and homaged in everything from a Bugs Bunny cartoon to movies to books and songs. Having only seen Casablanca a few times over the years, I was excited to finally see it on the big screen when it was shown recently at the Alameda Theatre. It was better than I'd recalled and I laughed at the fantastic banter, and felt a whole range of emotions from anger to sadness to joy as the characters interacted and struggled with personal and societal conflicts. The story and characters are enthralling, the cinematography adept, so that not only did I appreciate getting involved in the experience, but I could also see how well-crafted it is. The film deservedly is an Academy Award winner for best picture, director, and screenplay, and is on many best-of Hollywood film lists.

The actors are sublime, from Claude Rains as devil-may-care Captain Louis Renault (who is, cringe, also a bit predatory), Dooley Wilson as loyal and wise piano player Sam, to Sidney Greenstreet as a fellow racketeer and club owner in wartime refugee stop Casablanca. Humphrey Bogart is iconic as Rick, the jaded but ultimately noble club owner; Ingrid Bergman is subdued and strong as Ilsa; and Paul Henreid solidly portrays resistance leader Victor Lazlo. I've read that some consider Henreid stiff in the role, but I enjoyed his performance and found it moving in its subtle passion and commitment. Really, the entire cast shines and the dialogue sparks with wit and emotion. Even though I typically don't enjoy "unhappy" endings, the ending of Casablanca is completely satisfying. I left the film with a smile and a new appreciation for this nearly perfect screen gem.

Have you enjoyed Casablanca? Or do you think it's overly praised? Tell me in the comments!

Come back next Friday for a review of Alfred Hitchcock's Suspicion. Or, to get it by email, enter your email in the second box on the right. Thanks!