Here we go again... I rewatched Mamma Mia! (2008, PG-13) this weekend, my first movie for Firth February (to read my summary of Colin Firth movies, click here). Let's get right to a stream-of-consciousness recap: 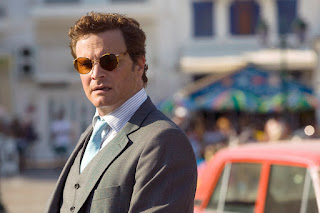 That's a lot of screeching girls--yikes! 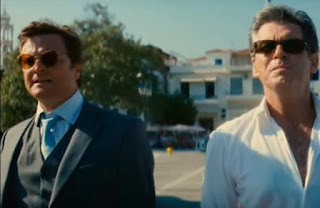 More squeeing from the girls, and she doesn't care that her mom doesn't know who her dad is--she just wants him to walk her down the aisle and she'll magically know who he is. Okaaay.

Oh, yay, Christine Baranski! So much talent. Wait, who's that other actress? Is that Mrs. Weasley from Harry Potter? Her hair is different.

And of course Willoughby is tackling the bridesmaids. (I explain to my friend that the actor played rakish Willoughby in the 2008 Sense and Sensibility.)

Firth has so much verve. Is that Julie Walters? (Checks Internet Movie Database) Yes, it's her--oh, she was Mrs. Austen in Becoming Jane--how have I not seen that yet?--she was just in Mary Poppins Returns with Colin Firth! And of course she was Mrs. Weasley in Harry Potter.

More squeeing. Blah blah blah. *Fast forward through some of the young people's songs...* ABBA songs are fun, though...

Meryl Streep is so talented. She was also in Mary Poppins Returns! (My friend thinks it's funny that she's in this outrageous movie, but I say it's definitely not the first time--like when she played a stereotypical wealthy romance author who steals someone's husband in She-Devil back in 1989. I like her as a rocker more in Ricki and the Flash.)

Whew, Firth is back. He's "spontaneous"--he's also the brightest spot in this movie!

If I drank wine, this would be a lot better with a bottle of it. (My friend laughs and says it's very over the top.)

And there are the three "dads" on the ship. Girl says in her head to Firth: "Are you the man of my dreams?" Why yes, yes he is...*lol* 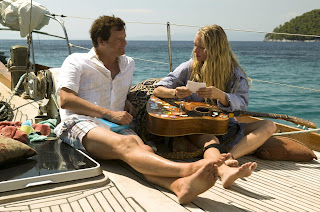 *snort laughing* Is Pierce Brosnan taking this singing thing seriously--he looks really serious. *snort laughing* He must have a sense of humor--he was Bond, and Remington Steele!

There is not enough Firth....zzzzzzzz

There he is! He's adorable. And there's the iconic wet white shirt...for way too short. (I explain to my friend--who hasn't seen it--the scene in the 1995 Pride and Prejudice.)

And there's the scene I used a GIF from, the other day on Twitter! Firth can sure shake it.

Wow, I rewatched it. Firth was delightful, but then, he usually is. I must rewatch Pride and Prejudice as soon as possible.

That's my recap! Have you seen Mamma Mia!? What's your take on it?
Posted by Reina M. Williams