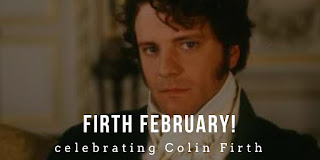 All February, I'm celebrating Colin Firth, because, why not? 😊 I'm a shy, somewhat socially awkward introvert, and it can very challenging for me to interact with people, even (or even more so) online. So, I came up with the idea of having theme months that would be fun for me, and hopefully, some other people. I know I'm not the only one who enjoys watching Colin Firth, right?
All this month, I'll be posting photos on Facebook (Fridays) and Twitter (at least Monday--Friday, look for #FirthFebruary), and blogging about his movies. I may even live-tweet sometimes as I watch. Will any of you join in? I hope it's going to be fun--at least I know watching his movies will be! And it gives me an excuse to watch the 1995 Pride and Prejudice again. What's not to love about that?

I had high hopes for seeing a bunch of his movies I hadn't, but unfortunately, most aren't readily available (I'm looking for free views, as I'm on another minimal spending year). Here's a link to Internet Movie Database if you want to see which of his films you've watched, or missed.


What I've already seen--and Firth is fantastic in them all:
The Secret Garden (1987): This may be my favorite adaptation of the beloved book, but I haven't seen it in so long, I can't be sure. I couldn't find it anywhere, so I'm not rewatching. Recommended.

Pride and Prejudice (1995): To me, Firth is Darcy. This adaptation is one of my all-time favorites. Glorious set and costume design, wonderful cast and script. Highly recommended.

The English Patient (1996): I saw this in the theater when it came out, but I found it tedious. I know a lot of people love it, and it's beautifully made, with a superb cast, but I can't personally recommend it.

Shakespeare in Love (1998): I haven't seen this in awhile, and it didn't make much of an impression, despite the marvelous cast. I may rewatch if I have time.

Bridget Jones's Diary (2001): It's been awhile--come back later this month to read a review of this and the other two in the series!

The Importance of Being Earnest (2002): I enjoyed this adaptation of the Oscar Wilde classic. Great cast, sparkling dialogue--lovely!

Love, Actually (2003): While I usually watch this every year, I have mixed feelings about it. Recommended (R).

Kingsman: The Secret Service (2014): Violent, darkly comic movie. I hid under my pashmina for much of the movie. Not really my thing.

Mary Poppins Returns (2018): My son and I recently saw this. It's another one of those "great cast" films, but it fell flat for both of us. Recommended with some reservations, but worth the price of a matinee.

What are your favorite Firth films? Hope to see you for Firth February!