So, I wanted to love Hallmark Movies Now, because I love a good Hallmark movie. Alas, I didn't love it. Are there lots of good Hallmark movies on Hallmark Movies Now? Yes, and their television shows as well! But, for me, the search functions were not intuitive, and I couldn't ever get the movies to go full screen, so that they were slightly cut off. I highly recommend doing the free trial before you sign up, as I did, so you can decide how it works for you. I did get to watch Loving Leah (2009), which I'd seen many years ago, and is still heartwarming, as well as In My Dreams (2014), a cute movie with a bit of magic. I would've liked to see more of the heroine's best friend (she was also in Loving Leah as a jewelry store clerk)--maybe someday she'll be the lead in a rom-com. Have you tried Hallmark Movies Now? 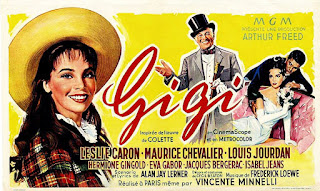 In other movie finds, since it's been a Paris week for me, I'm sharing the movies I watched to get me into that setting before I wrote Paris Interlude (it's still 99 cents on Amazon for two more days!). Some aren't set in Paris, but the choices at the library were kind of limited. Most had adult content of some kind, so if that's of concern for you, I can't recommend any of these, except my all-time favorite movie set in Paris, Gigi, a delightful 1958 musical starring Leslie Caron. (Though even in that, there is some innuendo and such, as her family were courtesans.)

I also watched: Amelie (2001), The Hedgehog (2009), Romantics Anonymous (2010), Paris, I Love You (2006). Amelie and Romantics Anonymous both have their moments, but overall, didn't stay with me as memorable. The Hedgehog is a drama, and is touching and well-done, but, ultimately, sad, at least for me. Paris, I Love You, seemed an odd mish-mash of vignettes, and the only one I enjoyed wholly was the one with Rufus Sewell. :)

Gigi still comes out on top for me. Do you have any favorite movies set in Paris?
I have no idea what I'll be posting about next week, but I'm excited for February, as it'll be Firth February and I'll be posting all things Colin Firth and Darcy next month! Only two more weeks--if you have any favorite Firth movies I should watch, please let me know!
Posted by Reina M. Williams